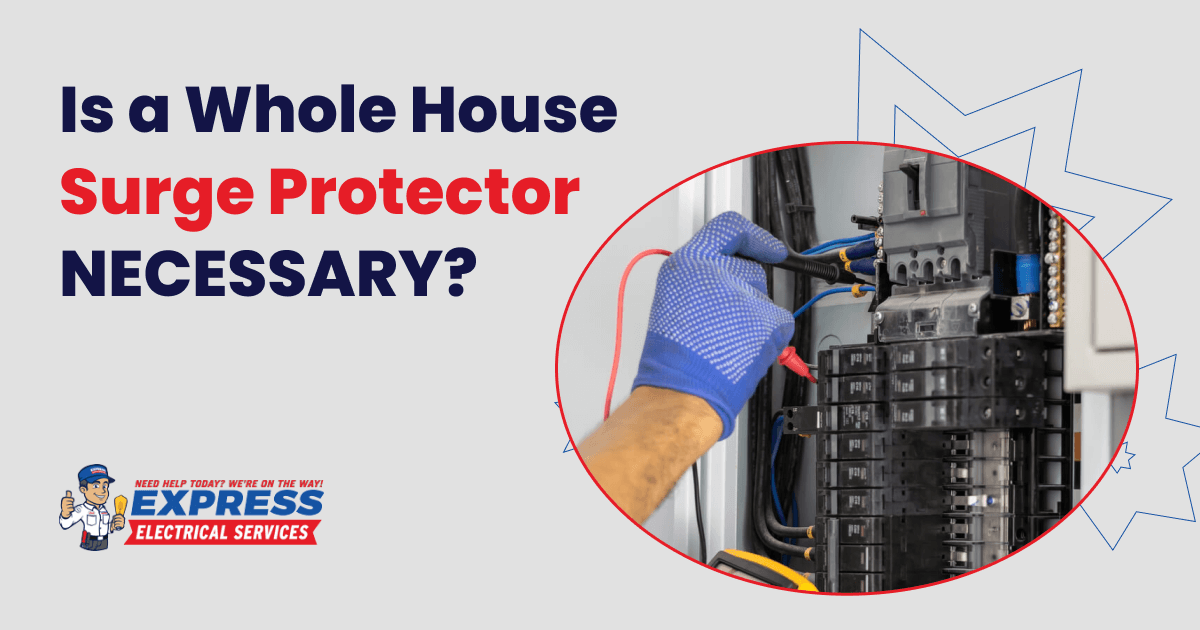 Downed power lines and lightning present electrical threats from the outside. But did you know most surges originate from inside your home? The truth is small internal power surges occur several times a day, making a whole house surge protector that much more a necessity. Their sources include:

A major electrical event, like a 200,000-volt lightning strike, can instantaneously destroy wiring, air conditioners, refrigerators, entertainment systems, and more in your house. On the other hand, smaller day-to-day surges often cause cumulative damage over time. Your appliances may continue working without any notable effect, but their lifespan can be significantly shortened. Sudden increases in electrical demand can cause surges as well.

How Does a Surge Protector Work?

A whole-house surge protection system operates via the principle that electricity follows the path of least resistance. It thus provides a path for current to run safely to the ground. This effectively blocks it from entering electrical circuitry.

A point-of-use surge protector is designed to stop electrical surges from damaging individual devices, like a computer or home entertainment system. The device plugs into a surge suppressor. A UL-rated plug-in surge protector that absorbs 600 joules or more and has a clamping value of 400 volts or less can be very effective at this level.

Installed at the main electrical panel or meter, a whole house surge protector monitors incoming power from the utility. It constantly monitors the influx of electricity. If there’s a power surge from the grid, the system can divert the excess to the ground (surges of voltage will never enter your home in the first place). It’s usually designed with connections for cable TV and internet routers, phone lines, and other circuits.

A whole-house surge protection system can provide up to 40,000 amps of protection.

A surge protection system for your entire home is a worthwhile investment. It costs more than a point-of-use device and requires professional installation. But large appliances can cost thousands of dollars to replace. The whole house system can therefore pay for itself even after a single power surge, not to mention prevent dangerous shocks and fires.

Serving Los Angeles and Southern California, we install whole house surge protectors in homes across the region. More powerful and sophisticated electronics, stricter electrical codes, and more frequent storms and natural disasters mean it’s all that more important to protect your home. These reliable, inexpensive systems can provide invaluable protection and peace of mind. To have a whole house surge protection system installed in your home by a licensed electrician, call 323-727-7799 today.