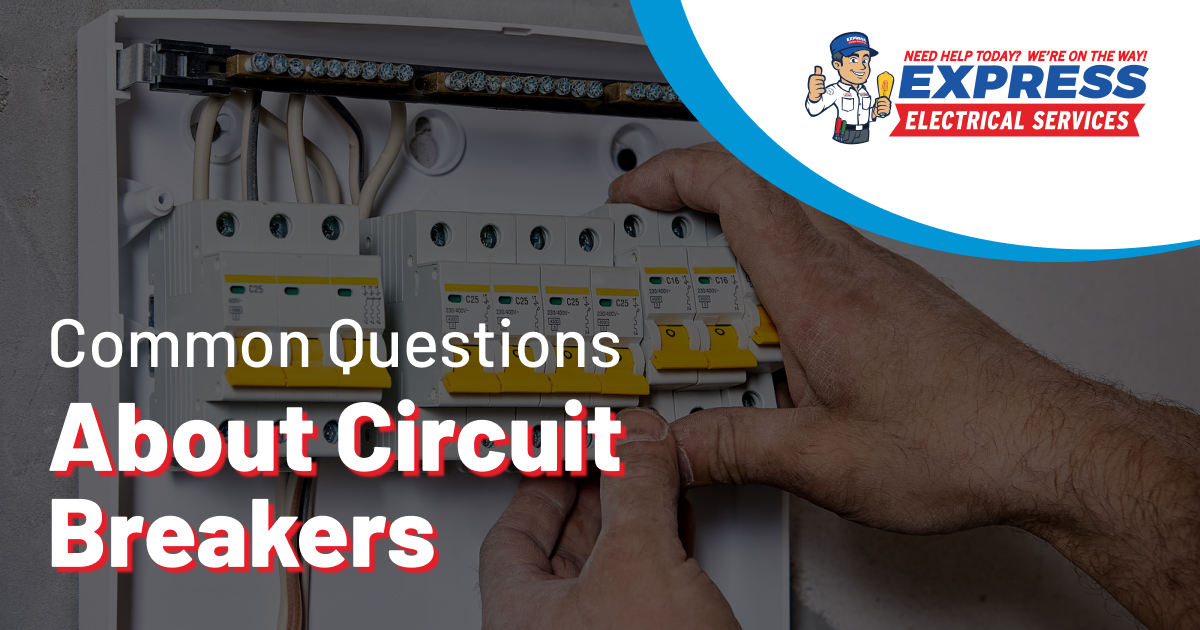 Express Electrical Services is a 24-hour electrician in Los Angeles you can count on to help with any electrical issue. Home electrical concerns often lead to an encounter with circuit breakers. Our team specializes in these crucial components. Here, we’ll answer a few questions we often get from customers, so you know how breakers work and what to do when one trips.

What Is the Area Where Circuit Breakers Are Called?

Circuit breakers are contained in the electrical panel. It may be referred to as the breaker panel, service panel, breaker box, or load center. Whether it’s a panel or sub-panel, the breaker box has a door that closes to protect internal parts. But the panel is always working, distributing power from utility lines to all the circuits in your home.

What Does a Circuit Breaker Panel Do?

In addition to distributing power to the living room, bedroom, kitchen, bathroom, laundry room, or an individual large appliance, the electrical panel is designed to sense when there’s an overload or electrical short. A breaker automatically switches off to prevent damage. Each circuit breaker corresponds to a different set of wiring and acts like a fuse, but can be reset to restore power.

How Do I Read a Circuit Breaker Panel?

In the breaker panel, each switch is in an ON or OFF position. If a breaker trips, it will be positioned in the middle. Therefore, you’ll know that that breaker corresponds to the device or circuit that isn’t powered. The panel should also feature a label on the door. It identifies each switch using numbers corresponding to individual breakers. Tags can be placed on switches as well to identify the appliances and zones they correspond to. Learn more about reading a breaker panel.

How Do I Trace Electrical Wires to a Breaker?

Turn on devices in a certain area; then flip each breaker off, one at a time. If the device/light turns off, you know which breaker it’s connected to. To trace multiple circuits, you’ll want to have a pen and paper to write down your findings. While having an electrical blueprint helps, you can also use a multimeter to test outlets to determine whether they’re powered or not. When you flip off a breaker, the voltage meter should show no power is reaching the corresponding circuit. Here are more details on tracing a circuit with no power.

How Do You Reset a Tripped Breaker Box?

If a room or specific appliance has lost power, switch it off. Then locate the circuit breaker box and open the door. The tripped breaker will be in the OFF position or the middle. If so, move it to the OFF position and then switch it ON. But if it won’t stay in the ON position or re-trips, there may be an overload, short circuit, or faulty wiring. There may also be too many things plugged into the circuit.

What Types of Circuit Breakers Are There?

Single-pole breakers work with 15-amp and 20-amp circuits with lights and receptacles. Designed to power larger equipment, double-pole breakers take up two slots. They’re connected to two wires rather than one to serve a 240-volt circuit with, for example, an air conditioner. Ground fault circuit interrupters (GFCIs) cut the flow of electricity if the current going out differs from the current going in; they’re often used where water is present. Meanwhile, an arc fault circuit interrupter (AFCI) senses electrical arcs to prevent fires.

How Many Breakers Are in a 200-Amp Panel?

A 200-amp panel with only single-pole breakers has 40 to 42 slots. If you’re using double-pole breakers, it will have 20 slots. Regardless of how many breakers the panel can fit, always pay attention to each circuit’s typical load. The total load should add up to less than the panel’s capacity. If you require more power or don’t have the minimum of 100-amps per the latest National Electrical Code (NEC) standards, it’s time for an electrical panel upgrade.

Our licensed electricians are trained to repair and replace circuit breakers and panels to avoid shocks, fires, and other hazards. Serving all of Southern California, we are available 24/7 for emergencies and offer same-day service for installations and upgrades. If you need assistance with circuit breakers, contact us online or call 323-727-7799 today.